He came, he saw and he conquered it all with his no-nonsense lyrical approach that spins around in his tracks painted with some wheels of impression; as he waves and overtakes at high speed leaving spectators in awe of his adrenaline-raising performances. Based in Grifton, NC, V of 40M is a revolutionary artist and activist spreading powerful and lyrically potent messages through the universal language of Music. He has got it all from his authoritatively impressive vocal tones that make their way uninhabited through the exploding hip-hop and trap beats, cutting through with vigor like some hot knife through butter.

His music journey has been nothing short of aspiring with his debut single “No Church on Sunday” amassing nearly a million streams along with countless features and cosigns. His follow-ups “The Inferno,” “Way Back,” and “Welcome” added on to that impressive and have gone ahead to stamp his status as genuine superstardom that will reign supreme for the years to come.

“Way Back (Warning)” produced by Saint Cardona is a lyrical gem, “First U came to get a taste of (uh)…Exchanged and we traded (what)…Then U came and invaded (huh)…Whips, chains, and enslavement (Yup)!” With its whooping flawless style that bangs with quality and sweeps a listener off of their feet with the danceable anthem that follows from the Intro all the way to the Outro!

V of 40M did not come to play and his no-holds-barred lyrical approach demands a listeners attention as he waves and slithers through the blazing heavy bass and atmospheric beat synths that are speaker thumping, he possesses a high-confident and deep voice reminiscent of rap legend Pop Smoke’s own voice and he also showcases a wide vocal range switching his voice and flows intermittently like some musical god. The beats are fire and each time you listen you catch a vibe from the slapping highway expression and the catchy and memorable hooks delivered in intricate fashion by V of 40M giving this track a timeless feel.

The track has so far garnered over 47. 2 K streams and more than 1.8 K listeners have made their feelings known by liking the track and as a sign of approval to its certified status. He is just getting started and in fact, he has barely scratched the exterior. Wait until he releases his upcoming projects and it is then you will get to know what he is made of! Follow the below link to vibe to “Way Back” which will take you back with its southern nostalgic melody that has been stylistically and intentionally incorporated to give it its unpredictable nature! How about that? 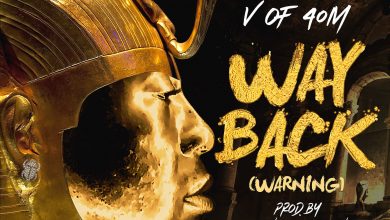