Today, Young Stoner Life artist, Strick releases a brand new album Strick Land. With features from the likes of A$AP Rocky, Young Thug, Kid Cudi, and many more, the album paints the next chapter of Strick’s musical journey and tells the story of Strick.

Strick’s talent for creating songs with deeper meaning is propelling him to the forefront of the evolving hip-hop landscape. Strick is a college graduate, veteran, and corporate executive turned artist who is ready to share his story and experiences through a brand new work of art. The robust and multifaceted recording artist, best known for honing his skills as a clever wordsmith and adept songwriter, tells the story of Strick through Strick Land.

Of the album, Strick relays, “the title for my album comes from my last name. I always told myself if I ever got an opportunity to release a real debut album as a signed artist that I would name it Strick Land. It’s a blessing that my dream has come to fruition and the entire experience has been surreal. Coming from my background to living my dream.”

Strick has been releasing singles leading up to the release. The most recent track “Play Stupid” featuring Swae Lee arrived after “Bad Girl” feat. Kaash Paige. “Bad Girl” released with a cinematic video that perfectly packages Strick and Kaash’s melodic vocals and the ambient vibe of the track. With a steady stream of content, Strick also released the “Moonman” music video featuring Kid Cudi and Young Thug. The fan-favorite video received rave reviews and showed “the trio taking a trippy flight through lavender skies, munching on a large stack of pancakes as each artist delivers their smooth verse.” [Complex].

Strick’s poetic nature paired with his unparalleled work ethic and unwillingness to compromise who he is allows him to keep advancing forward and doing so with feeling. Like Tupac, Big L, Big Pun, Eminem and the lyricists who helped pave the way, Strick aims to inspire people to care about what they are saying and to be passionate about the mark they are making on the world. Naturally, you’ll find him leading by example and enjoying every step of the way.

Strick has garnered a reputation for tapping into his diverse professional background both in business and in the U.S. Air Force to elevate both his business acumen and genuine creative output alike.

After relocating to Atlanta in 2012 and founding his own branding agency for aspiring musicians Foundation 86, Strick moved to Los Angeles to pursue his own career as an artist. He then landed his first official placement on Kanye West and Juicy J’s “Ballin’,”leading him to work with artists such as Travis Scott, Jeremih, K. Michelle and Wiz Khalifa. In 2016, Strick earned his first platinum record “coordinate” off Scott’s Birds in the Trap Sing McKnight ​album, further igniting his hunger to continue developing his skills as a songwriter. That same year, he went on to join Young Thug on several tours, including the Hi-Tunes tour (2016) and the Hi Horse’D tour (2016/2017). He was then invited to join Young Thug and J. Cole on the ​K.O.D​ tour (2018) and the Young Thug and Machine Gun Kelly on their co-headlining tour (2019. Most recently, Strick partook on the Justin Bieber Big Tour (2019).

In July 2017, Strick dropped his debut EP, ​Risk=Reward​. In 2018, he released January’sRisk=Reward 2​ and April’s ​Pairadice​, going on to ink a deal with Young Stoner Life Records and 300 Entertainment. He appeared on Young Thug’s 2018 ​Slime Language​ compilation, with their collaboration “STS” amassing over 12.5 Million streams + *nearly 10 Million catalogue streams to date. Making his label debut in 2019 with See You When I Land, Strick quickly followed with The Machine Vol. 1 mixtape series, featuring Young Thug, T-Shyne, HiDoraah, Young Jordan, and Zelly Vibes. Later that year, Strick released the second volume, including collaborations with 6LACK, Veedoe, NAV, and Billyracxx. 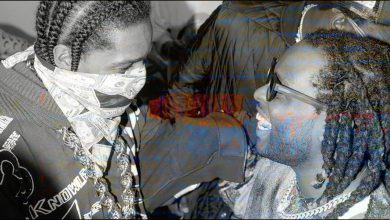