Kosha Dillz x Jenya team up with all their friends to make an NYC comeback for the summer of 2021. The laid-back hip hop meets indie-pop vibe is that car ride song you need in a city where it is impossible to drive. Of course, he takes shots at the “LA Rental Rap star” and rapping outside the Grammys on the street because alas, he didn’t get one…yet. But whether you are in LA traffic or in NY on the L Train, you can really bump this anywhere.

For the cast of characters in this video, Dillz encompasses what NYC has birthed him during the Pandemic; the gift of street performing. Instead of beauty and lavish life, he opts for a dancing Elf (Elfofnyc) and legendary twin dancers Tic and Tac on the dirtiest limousine of Bushwick. Why dance with Instagram influencers at the likes of Tao when you can be in Washington Square Park amongst a parrot and 8-foot boa constrictor on the neck of a rollerblading man from the Bronx dancing with a buzz cut girl and her DOGE flag. Washington Square Park has heavily been pressured by police to shut down all performances and protest activity. and it couldn’t have a better song to uplift themselves while the city comes back to life and the song yearns for new normalcy. In the words of Kosha Dillz – “My homies get flinstoned Yabba Dabba Doo, in order to win sometimes you gotta lose.”

The hook repeats the fact that Dillz has been failing his whole life but he thinks it’s alright because he is doing better than he thinks he is. As we crawl out the pandemic and bring with us a batch of new mental issues, the ultimate message of Yabba Dabba Doo is that we will be ok ok ok. The 39-year-old rapper hasn’t played a show since 2020 or given up after a decade of unsuccessfully trying love. Instead, he has opted for friendships with subway creatures friendships and street corner shows in tuxedos with the likes of New York Nico and What is New York, whose comment section gave birth to the song’s name Yabba Dabba Doo after a clip garnered 30,000 views in a day.

Yabba Dabba Doo is certainly a carefree brand Kosha has implemented to his next-level hustle similar to what “YOLO” once was years ago.

It is no wonder his TikTok videos of rapping as Moses w/ Takeoff of the Migos outside Verzuz or on the Brooklyn L train at 2 am as a “rapping leprechaun” have his over half a million views, while Yabba Dabba Doo aims to be more introspective. “You live once…so make sure you do everything you can!”

New York City is coming back and Dillz is one of the leaders, owning his awkwardness and leaning into it more than ever before. With support from Gary Vee and T-Pain on the track already. 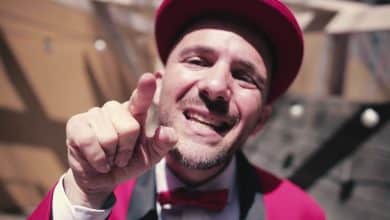 Kosha Dillz – Is It Me